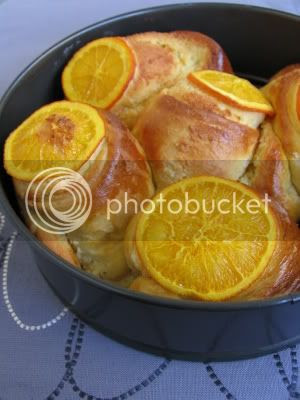 I've been fascinated by the Japanese's skill of pastry-making recently, and ever since I found out that Kinokuniya actually stocks in a huge series of Japanese cookbooks that are translated in Chinese, the Chinese book section of this sinful bookstore has been my favourite since.

During a recent trip to the store, I got hold of a copy of "Real Homemade Recipes for Bread-making", a book by Heart Bakery 21 Club. Incidentally, I've found out from the Introduction that Heart Bakery 21 Club consists of a group of professional bakers that constantly try out recipes by using kitchen utensils for home use. From there, they've developed a series of recipes that are suitable for home bakers.

One recipe that caught my eyes was Carrot and Almond Buttercream Bread. The key ingredient, minced carrot was mixed into the dough, after kneading, it was left to rise for 1 hour. In the mean time, prepared almond buttercream by mixing almond meal, butter, sugar and vanilla essence together until it formed a smooth texture. When the bread dough was ready, divide the dough into 5 equal portions. Using a rolling pin, rolled out one of the doughs into a rectangle and spread the almond buttercream over it. Rolled up the dough and placed it in a greased baking tin. Repeat the process with the other 4 doughs. Let the dough sit in the baking tin for another 50 minutes, just before popping it into the oven, brush the dough with egg and decorate with orange slices. 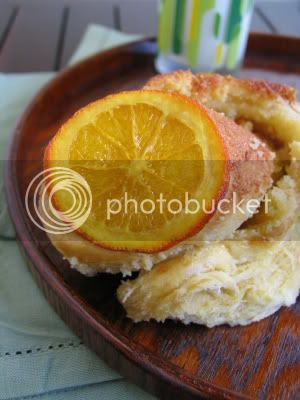 The bread looked funny in the baking tin with orange slices facing in different directions. But it tastes really good and it was a yummy treat for the TV-watching session in the afternoon.
Email Post
Labels: Bread

Anonymous said…
hi piggy, this bread looks absolutely delish!! do you hv the recipe in exact measurements for this? thx!
July 31, 2006 4:46 am

It's been a year (almost) since the last food bloggers' gathering. I'm trying to organise another meal for the food bloggers on the 26th August, Saturday, 7.30pm, venue to be confirmed.

Would you be interested in attending? Please email your reply to me, colinliew@gmail.com, as soon as possible.

Anonymous said…
The bread sounds delish! I love Japanese-style pastries too. Too bad my Mandarin is rusty, I'm sure there must be some great finds among those Chinese cookbooks.
August 02, 2006 4:28 am

I just discovered your blog. Am reading through all the past entries. I love your photos and explanations. Have a few recipes that I want to try already. This latest carrot and almond buttercream bread looks DELISH. Please...please share the recipe with us. Thanks!
Jenn
August 11, 2006 11:30 pm

lovely bread there, hope you can share the recipe with us. Thanks.

Rene said…
Hi, I went searching for in Kinokuniya @ Taka to no avail. Found mostly Taiwanese cookbooks instead.
September 22, 2006 11:30 am

Really? The Jap cookbooks that I've got are the ones published in Taiwan... well, i've not been to Kinukuniya lately, I wonder if they still bring in as much Jap cookbooks as before. ;-)
September 25, 2006 10:32 pm

Rene said…
Hi Piggy,
Maybe I just need to look at them more closely again when I am there again. If there are published in Taiwan, I might have dismissed them as Taiwanese instead. But thanks for your help and recommendation. I bought a very beautiful cookbook from there and hope to try it out soon. (^.^)
September 29, 2006 9:21 pm