A Glutton's Journey in Tianjin

I was in Tianjin, China for a training last week. Besides being trained for whatever skills that are necessary for my job, my other purpose of the trip was to eat!

After I touched down at Beijing airport, I took a two-hour car ride to Tianjin. By the time I arrived in Tianjin, it was already late evening and I was starving! After checking in my room, I went out of the hotel, trying to get oriented with the surrounding, and also to look for food. Being in a business district, there are no decent Chinese restaurants in sight, other than a 马兰拉面 across the street. I knew that this fast food chain serve mediocre noodle dishes, but I just need something to fill my stomach. True enough, the noodle was overly salty with 2-3 tiny slices of beef. Bleh! 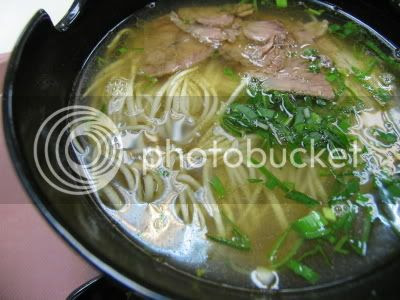 Hubby was in another part of China attending meeting, and he joined me in Tianjin on my second day there. We met up with his friend who is a local for dinner, and the friend brought us to a place call 南市食品街, which is a building with lots of restaurants and shops selling local snacks. 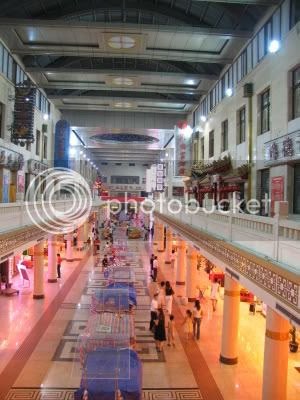 This was one of the interesting dish that we tried: 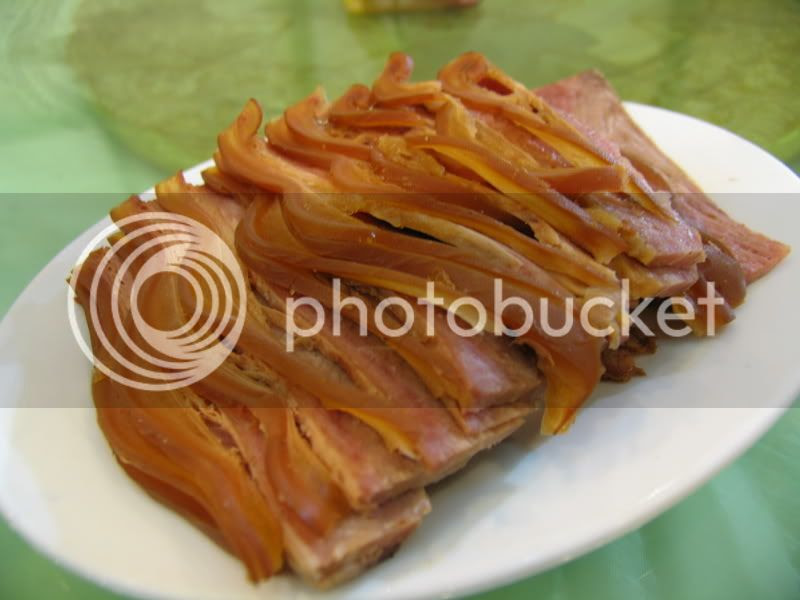 Make a guess, what is this? It's donkey meat! I know that people will freak out when they see this, but it's actually not bad. It tastes like pork, even though the life form looks more like cow or goat rather than pig.

The other dishes that we had were: (1) Stir-fried beef (something quite common); (2) Diced duck with nuts and fruits ( The taste was fantastic, my favourite dish of the night); (3) Stir-fried squid (something quite common as well); (4) tofu in sweet and spicy sauce (taste great!); (5) Soup with lots of ingredients; (6) Fried fish (the fish was carved into flower shape before it was deep fried, it was very crispy and fresh); (7) local noodle soup, that looks like our kway teow.

We didn't manage to finish all the food, and we were so full that we had to crawl out of the restaurant. 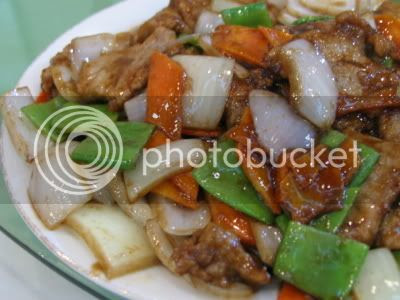 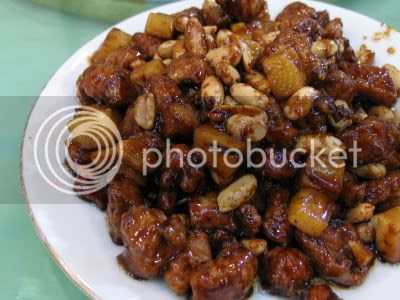 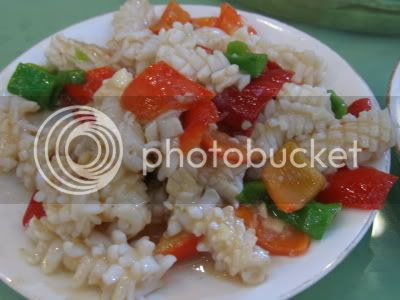 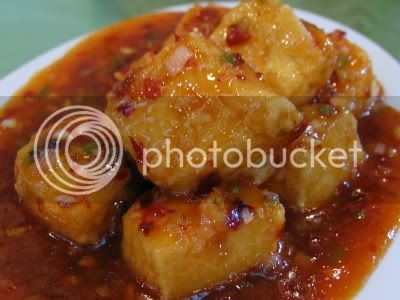 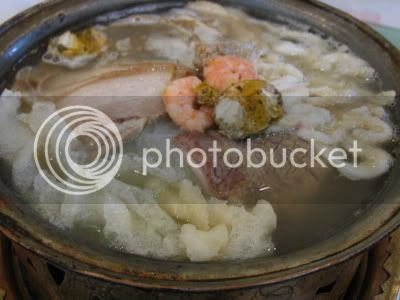 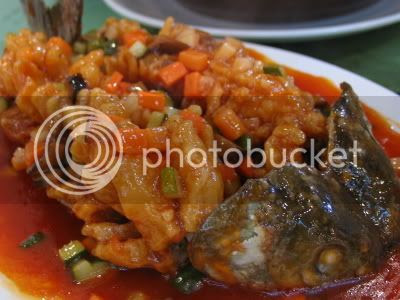 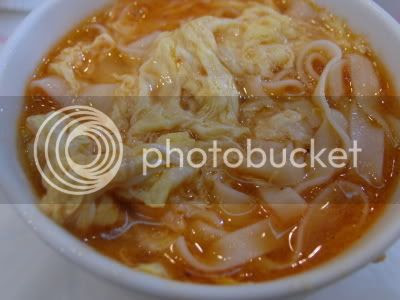 On the third night, I was determined to try out the 狗不理包子 (Gou Bu Li pork bun), a signature dish of Tianjin. I brought one of my colleagues to the same place again, but this time round, we went to another restaurant, which is simply called 狗不理 (Gou Bu Li), that is said to be famous for the pork bun. 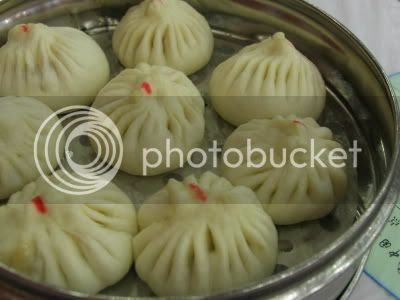 I was excited when the pork buns were served, the buns were smaller (about 5cm) and flatter than normal char siew bao, and it looks pretty with the plaits on top. But after the first bite, I was really disappointed. It tastes just like any of the pork buns, and I don't understand why it is so famous.

The other dishes actually taste better. We had stir-fried 娃娃菜 (loosely translated as "baby vegetable", but it's actually a kind of small bok choy), stir-fried diced beef with sesame and chestnut, and fish slices. 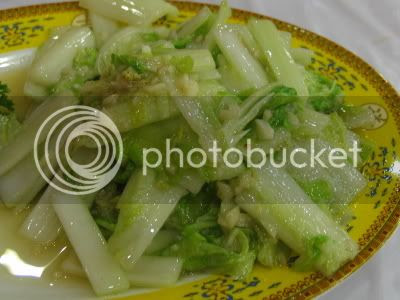 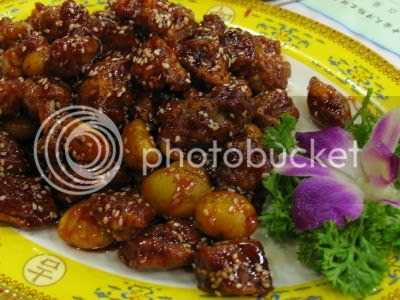 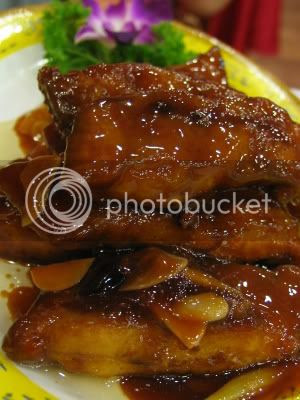 The restaurant were filled with local Chinese from other parts of China, I could see some of them with Tianjin maps in their hand. I guess this place is popular among tourists, and it was shown in the bill too! The 4-dish meal cost both of us RMB164, compared to the dinner the night before, that was 8 dishes for only RMB120. I'd say it's quite expensive.

My colleague and I walked around after dinner. We bought lots of local snacks like nuts from 崩豆张 (See this for more information of the shop), 十八街麻花 (another famous snack from Tianjin) etc. 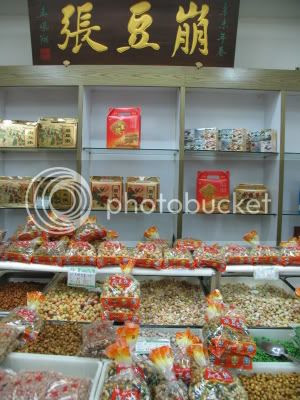 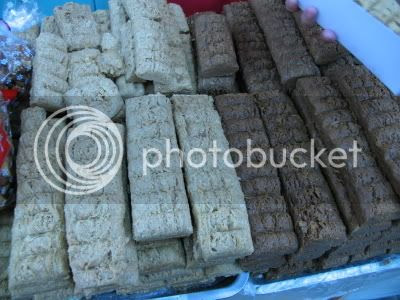 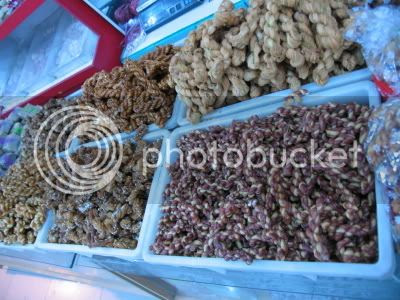 After the training, I stayed on during weekends to visit some of the tourist attractions. 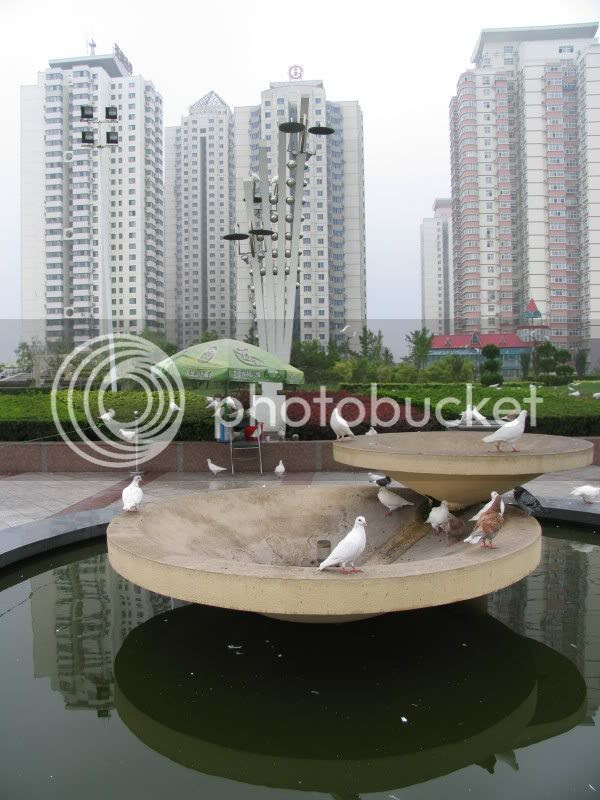 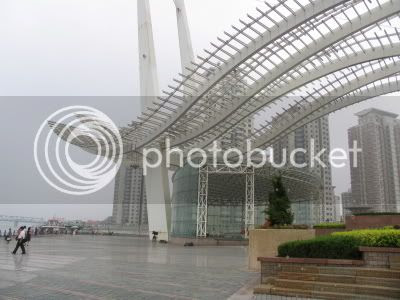 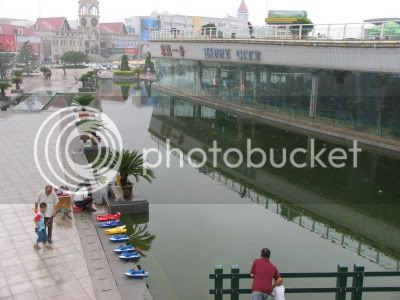 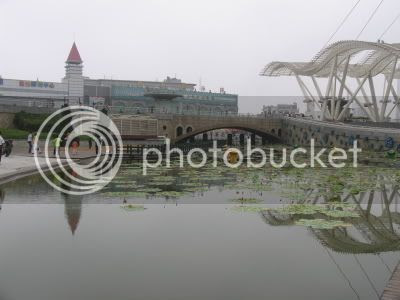 We went to a restaurant that has been around for more than 100 years for lunch. The restaurant is popular among locals and we had to book a table the day before. 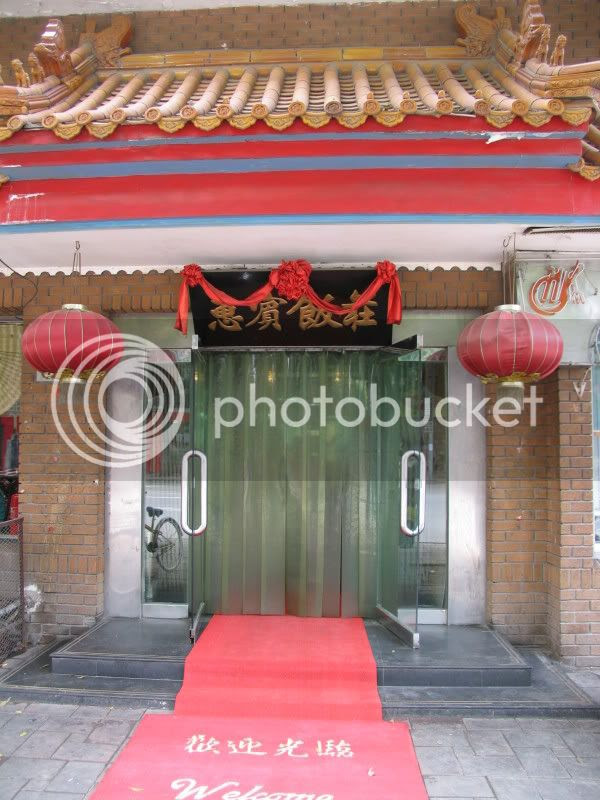 The interior of the restaurant is rather old, and fills with cigaratte smoke. Faced with a huge range of food in the menu, we had a hard time deciding what to order. In the end, we picked those items with a "star" on the menu, which are supposedly the signatures dishes of the restaurant.

When the food was served, we were blown away. The food was really good, in fact, it was much better than the two restaurants that I went to two nights before. One of the dishes was 水煮鱼, which was sliced fish in sichuan hot and spicy soup. The fish was very fresh, and it has to be eaten by dipping into the spicy soup. Halfway through, my mouth went numb and I could hardly taste anything at all. But I carried on, with sweat and tears and all... 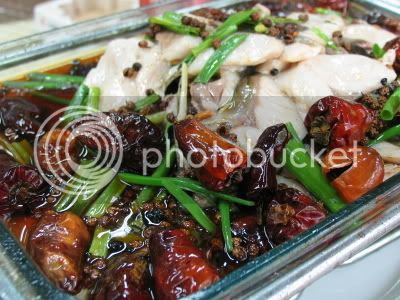 This is a kind of mushroom, cooked in sweet and spicy sauce. 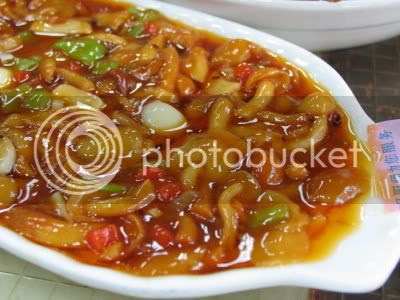 八珍豆腐, a tofu dish with ingredients like sea cucumber, shrimps, pig's stomach, dry scallop, mushroom, young bamboo shoot, squid etc. Don't be fooled by its look, this is no ordinary tofu dish. It tastes great! Especially the tofu, it was slightly on the yellow side, but it literally melt in the mouth. This is definitely the best tofu I've eaten in my whole life! Hubby and I gobbled down the whole dish immediately. 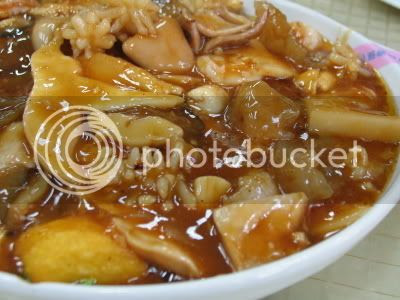 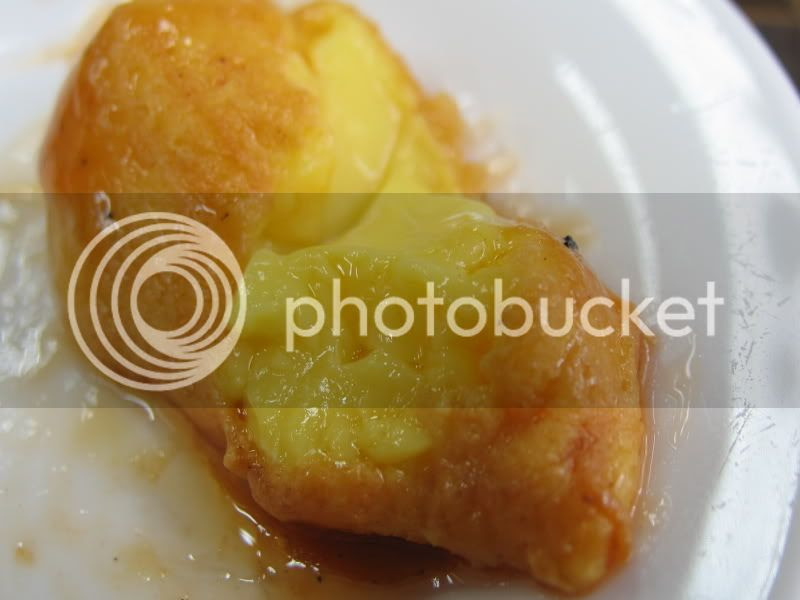 After a satisfying meal, we sipped tea while people-watching in the restaurant. 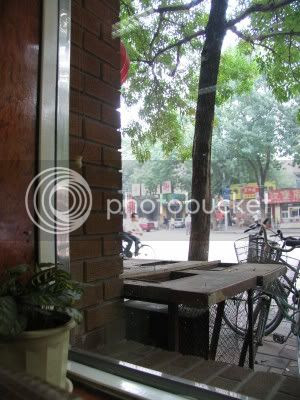 The bill only came up to RMB73! I was told by hubby's friend later on that the restaurant charges such low price because it is far from business district.

If you ever go to Tianjin, try to pay a visit this restaurant.

Anonymous said…
wow! the food made my mouth water!the yellow tofu is called "japanese tofu" in KL. Its sold in tubes, about 6-7 inches long and its not fried. Unwrap the tube, cut tofu into 6-7 pieces, dip in flour and deep fry. yes, the tofu is really silky and delicious...
August 31, 2006 5:00 am

Anonymous said…
The food looks GREAT! We live in Arizona and good Chinese food is hard to find. We have a place called Hong Kong Restaurant near our house and in fact were just there last night. Choy, the owner is from just outside Hong Kong. We always order the the Chinese menu and have never been disappointed. I just found your site last week and am going through the archives now. Great site.
September 02, 2006 12:14 am

Unknown said…
hey i am a design editor of BALLER MAGAZINE,and i was interested in publishing a few of your DONKEY meat recipe pictures in our magazine, which fits in our meat section of this months issue. if i could recieve some high resolution pictures of your dishes for the magazine article it would be great.