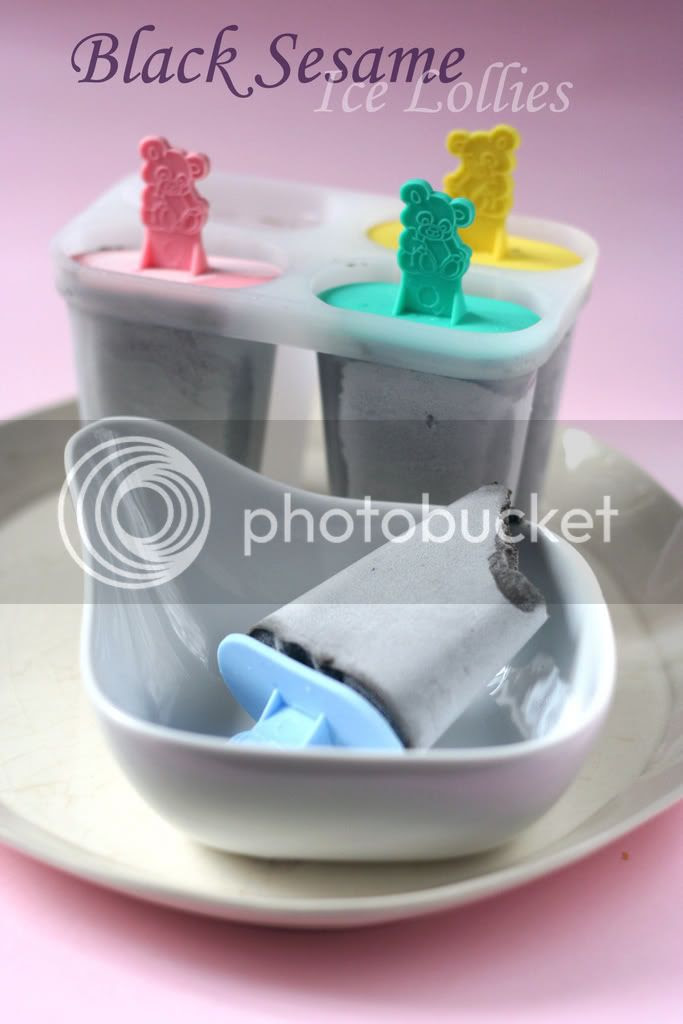 I've truly understand the difficulty of taking pictures of ice lollies in Singapore weather. Not that I'm not aware of the fact that ice melts faster in hot weather, but to see the ice lollies melt before my eyes even before I've taken a satisfactory shot was horrifying. Even setting up the props before taking the ice lollies out of the fridge did not help. I was sweating profusely during the picture taking session, and I guess it was mainly caused by stress rather than the hot weather!

Method:
1) Stir-fried black and white sesame in a wok until fragrant. Using a grinder, grind the sesame until fine.
2) Add milk, honey, sugar and ground sesame in a pot, cook in low heat until sugar is dissolved.
3) Whisk egg yolks and cornstarch, then add in to the sesame mixture.
4) Continue to cook in low heat until the mixture is thickened, turn off heat and let the mixture cool to room temperature.
5) In a separate bowl, whip the cream with vanilla essence, then add in to the sesame mixture.
6) Pour the mixture into ice lollies molds. Freeze for 3-4 hours, serve.
Email Post
Labels: Dessert

Anonymous said…
Hey there, came by ur blog by chance :) I think there's something to do with the name being "Piggy" ;) (fellow pig lover here), but ur recipes look so good! Wished i had discovered ur blog when I was back in Singapore.. I so wanna try the Steam chicken in lotus leaf recipe, but it's so hard to find lotus leaf here.. :( bummer..
August 31, 2007 8:35 pm

Anonymous said…
That's an awesome pic, Piggy! No signs of the ice cream melting at all. The lolly molds are so cute, where'd you get them?
September 02, 2007 1:09 am

daphne said…
That looks great! And I can't see any signs of them melting away. Your photography skills are amazing!
September 03, 2007 12:45 pm

thanks for dropping by! Glad to know another pig lover. :-)

when u're back to SG, buy more lotus leaf from here and try out the recipe.. :-)

The lollies mold is cute, right? I got it from City Super in HK.

This pic is one of the first few that I snapped. It still looks ok compared to the rest. Thanks for your compliment!
September 04, 2007 4:11 pm

Thanks for dropping by!

Edith said…
Thanks Piggy for such wonderful recipe. My family loves it. It was so delicious, now wondering whether other flavours will work as well. hehehe
September 09, 2007 1:51 pm

Anonymous said…
Hi,
May know what kind of grinder did you use to grind the sesame seeds?