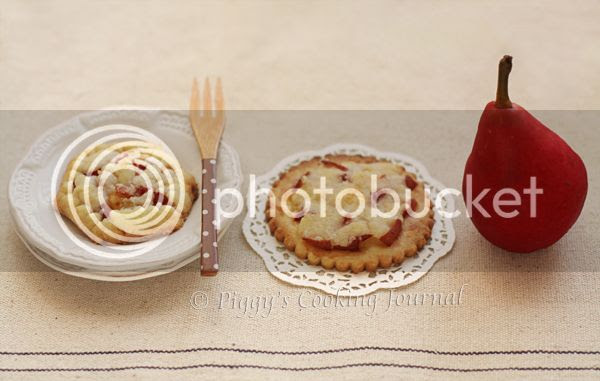 Even though fresh and delicious fruits are available in Taiwan all year round, but certain common fruits like pear are nowhere to be found at all. I guess that's because pear has to be imported and if you've been to Taiwan, you'll notice that the range of imported food (or any goods in general) are quite limited. So for local seasonal fruits like mango and strawberry, once the season is over, it is really impossible difficult to get hold of them. In Singapore, other than durian and lychee, most "seasonal fruits" are available all the time as they are imported from different parts of the world. But the downside is that, they're usually not as sweet and juicy as the ones that I get in Taiwan, especially when such fruits are in the midst of their peak season. Well, I guess I can't have the best of both worlds and I just have to live with it!

Back to the topic of pear. To me, it is part of the 4 staple fruits that are available in Malaysia/Singapore at all time, i.e., apple, orange, banana and pear. Even when I was staying in Saudi Arabia, there's never been a shortage of these fruits. So imagine my surprise when I first came to Taiwan and realised that pear is no longer the staple that I've grown accustom to. Having said that, I'm not really a big fan of pear, and I only bought it occasionally for baking. But since I came to Taiwan, I could only ogle and sigh at the beautiful pictures of pear desserts/pastries and I could never have the chance to try the recipes out.

But two days ago, when I was doing grocery shopping at a small supermarket next to the apartment where I stay, I was pleasantly surprised to see a few packs of pears (with a label that says, "imported pear") lying in the fruit section. I am not sure if they will continue to import these pears but I knew that I had to grab a pack before it's all gone!

To make full use of the precious pears, I tried out several new recipes and one of them is mini pear rustics. The original recipe yields 24 tartlets and that's too much for a two-person household. So I scaled down to a 1/6-batch and I got 4 tartlets instead. The edge of the tartlets are supposed to be folded towards the filling, but I did that for only two of them and left the other two unfolded.

For the filling:
4-5 pears, unpeeled and cut into 1/4-inch cubes
2 tablespoons castor sugar

To prepare the dough:
1) In a medium bowl, combine flour and sugar. Add butter into the mixture, toss and make sure that every piece of butter is covered with the flour. Using a pastry cutter, press and cut the butter into the flour until the mixture resembles fine meals.
2) Mix vanilla and water in a small bowl, add to the flour mixture. Continue to cut and press the mixture until the dough barely comes together.
3) Turn the dough into a floured surface. Dip the heel of your hand in flour, and working with small sections, smear the dough away from you to blend it together. When the dough is all smeared out, using a scraper or spatula to gather it together.
4) Knead the dough a few times and shape it into a disc. Wrap in plastic wrap and chill for at least 2 hours or overnight.

To prepare the streusel topping:
1) Combine flour and sugar in a bowl. Add butter, cut and press the butter into the flour with a pastry cutter until the mixture resembles coarse meal. Cover and chill in the fridge until ready to be used.

To prepare the filling:
1) In a medium bowl, toss the pear cubes with sugar. Let it rest for 1 hour or until the fruit begins to release some of its juices.

To assemble the tartlets:
1) Divide the dough in half and return the other half to the fridge. On a lightly floured surface, roll out the dough to 1/4-inch thick. Using a 4-inch round cookie cutter, cut out circles and place them on trays lined with parchment papers. Chill the circles in the fridge until firm, about 30 minutes to 1 hour. Repeat the steps with the remaining dough.
2) Remove circles from the fridge. Mound 2 tablespoons of pear cubes on the center of each circle. Fold a small section of the edge of the dough up toward the filling and press down to seal. Fold another section up toward the filling and press down where the two edges overlap to ensure that the dough holds the folded shape. Continue to make your way around the tart and make about 6 folds. Repeat with the remaining circles and place them on the tray lined with parchment papers, 2 inches apart. Chill until firm, about 30 minutes to 1 hour.
3) Pre-heat the oven to 375 degree F. Spoon a tablespoon of the streusel topping over the exposed fruit and press down gently so that it adheres.
4) Bake in pre-heated oven for 20-25 minutes, or until the crust is golden brown. Rotate the tray halfway through to ensure even baking.

Anonymous said…
For a miniature food lover like me, I will definitely not let this mini pear recipe just go unbookmarked. Such an amazing treat and pretty presentation. Thanks for posting!
October 25, 2011 4:13 pm

Juls said…
Oh! These look fatastic! Why is the pear so red?! I'm assuming its a different pear than what I'm used to! I will definitely be making these!
October 25, 2011 5:59 pm