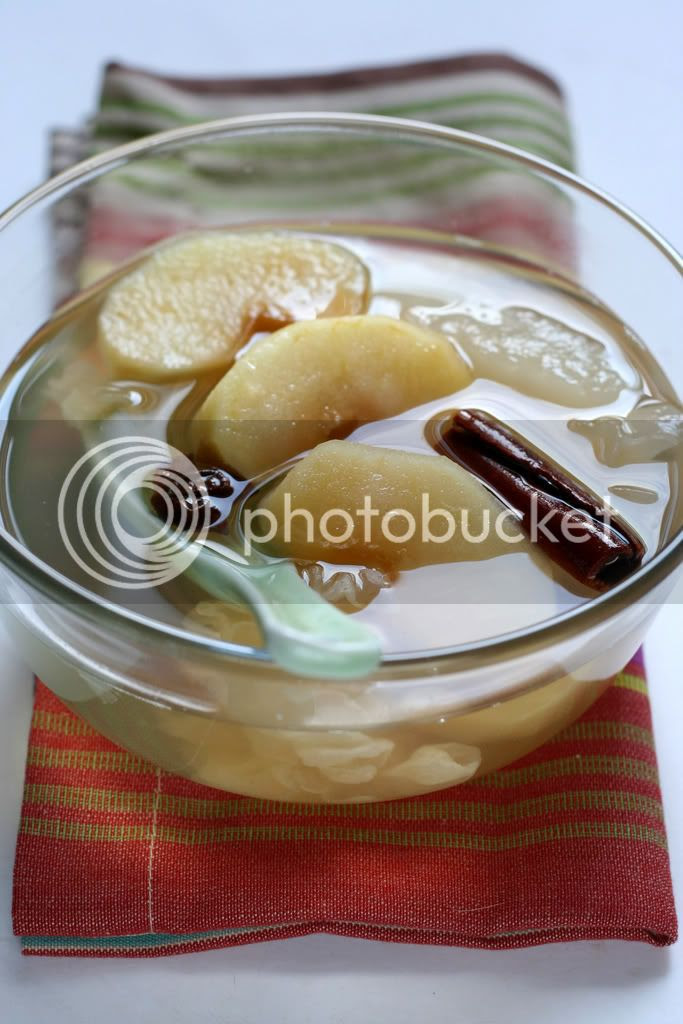 I usually prepare a big pot of Chinese style dessert when the weather is hot, keep it in the fridge for a few hours and then eat it in the afternoon.

One such desserts that I cook often is Apple-White Fungus Soup (蜜汁银耳苹果). It is a clear soup that consists mainly of apple slices and white fungus, with a hint of cinnamon, star anise and tangerine peel flavour. I've read from some articles that such dessert helps to improve our complexion, especially when it contains white fungus which is believed to have the same benefits as bird's nests. Not sure if it is true, but it doesn't matter to me, as long as the soup tastes good and it helps to cool me down when the weather is unbearably hot.

Method:
1) Soak the white fungus until softened, cut into small pieces.
2) Boil the water, add in white fungus and cook for 30 minutes.
3) Add in the rest of ingredients (except lemon juice) and cook for another 30 minutes.
4) Remove tangerine peel, star anise and cinnamon stick from the soup.
5) Add in lemon juice, let the soup cool to room temperature then keep it in the fridge for a few hours. Serve.
Email Post
Labels: Chinese Dessert

Anonymous said…
Your dessert sounds delicious! I have lots of apples (went apple picking 2 weekends ago). Can't wait to try this!

Chubbypanda said…
Looks perfect for beating the heat. We're got wildfires everywhere here in Southern California. The weather and air conditions are awful.
October 26, 2007 5:02 am

Anonymous said…
Made this the other day. My hubby didn't like it. But my son and I 'sapu' everything!!! Slurp!!!

Glad to know that you like the dessert. It's yummy and refreshing, isn't it? ;-)

David Hall said…
This looks beautiful - not so sure on the name 'fungus' being in the title of a dessert but I would still eat it!

Thanks for dropping by!

White fungus is used in this dessert. You can see how it looks like in my other blog post, it's shown in the second picture: http://piggyscookingjournal.blogspot.com/2007/04/steamed-bamboo-pith-rolls.html.
October 31, 2007 6:14 pm

Mandy said…
my ex-housemate introduced me to this dessert a couple of years ago. She didn't use cinnamon, lemon and star anise though. Your version sounds delicious. Inspired me to revisit this old recipe since apples are abundant here. :)
November 02, 2007 4:44 am

Anne Coleman said…
Hello--love your blog! I wanted to pass on a head's up to you--my content was being copied at this blog:
http://cooking.0ms.eu/?cat=2
and when I googled other entries it turns out they're all stolen with no link back. This recpe is there.

Glad that you enjoy the dessert!