Which came first - the Chicken or the Egg?

This was the second consecutive Saturday that hubby and I spent at home. Reason #1: I thought if I want to become a good cook, I better spend more time cooking at home. Shopping around town won't help! Reason #2: It's my good friend LG's wedding on Sunday and I have the honour to be her bridesmaid. I want to rest well even though I know that I won't be the centre of attention on her big day... but at least I won't scare the guests with two big eyebags!

I went through rows of cookbooks and I spotted one of my mom's cookbook that is probably as old as myself. Title is: Simple Local Dish from China. I leafed through the pages and I realised.. wow! Some of the dish are not as simple as the title claims. Anyway, I managed to screen through all recipes and found two that seems easy to follow. The main ingredients for these two dishes are chicken and eggs. 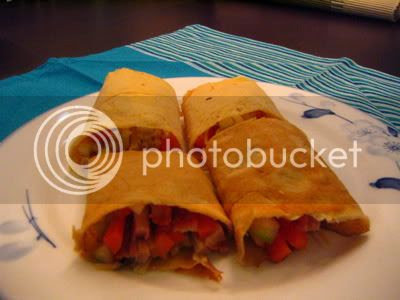 1) Three strips in egg wrapper (Warning: You probably won't be able to understand the title or the cooking steps, I'm really lousy in translating from Chinese to English)

The three strips refer to char siew, cucumber and blanched carrot that are cut into long strips. Marinate with sesami oil and some salt.

To prepare the egg wrapper, first, whisk two eggs. Then add some salt and pepper. Heat up a well greased pan, pour 1/3 of the egg in it. When the bottom of the egg turns brown, quickly flip the other side over. Transfer the egg wrapper to a plate and cool. Continue the process with remaining egg.

Verdict: The taste is so-so, due to the overcooked carrot. The egg wrapper is trickier to handle than I thought. The first piece has lots of blisters on the surface. I guessed it's due to excess oil in the pan and I was right! After I wiped away the oil from the pan, 2nd and 3rd piece of egg wrapper turned out to be ok. 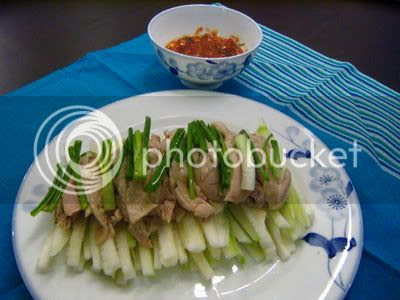 I know, I know.... you must be scratching your head now... The "bang-bang" here is not the sound of firing from a pistol. It means "stick" in Chinese, it should be read in han yu pin yin. :-P

I used two chicken thigh in this recipe. First, place the chicken in a pot of water, together with 3-4 slices of ginger and shallot. Heat up the water and when it starts to boil, turn down to low heat. Cook for 20-30 minutes or until cooked through when tested with a chopstick. Let the chicken cool in the soup.

Meanwhile, prepare the chili sauce by chopping up 1 chili, 2 cloves of garlic and 2 slices of ginger. Spoon in some soup from cooking the chicken and add 1 tablespoon of light soy sauce.

Cut the cucumber into strips and line it up in a plate.

When the chicken is cooled enough to handle, cut into strips. Place the chicken on top of cucumber. Serve with chili sauce.

Verdict: The chicken was tender, texture was good.... but it was not as tasty as the Hainanese Chicken, probably due to lack of salt when it was cooked. I like the chili sauce, it still has bits of chili and garlic, as I didn't grind it to mush. I'll try this dish again with Hainanese chicken version, probably after I get the recipe from my mom!
Email Post
Labels: Chicken