The working trip had officially ended on my 5th day in India. My colleague, N and I left Mumbai on Friday morning and we took a flight to New Delhi. Upon arriving at New Delhi, we took a chauffered car, which was booked from a travel agency to a city called Agra (where Taj Mahal is).

The journey from New Delhi to Agra took 4 hours and halfway through, the driver stopped by a motel, where we had our lunch. We were quite hungry by then, and we were excited to see this nice little motel. 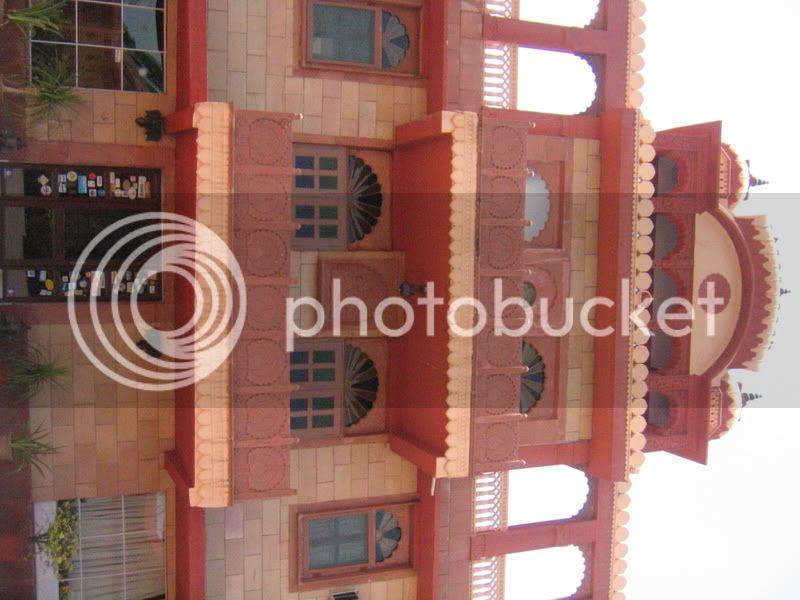 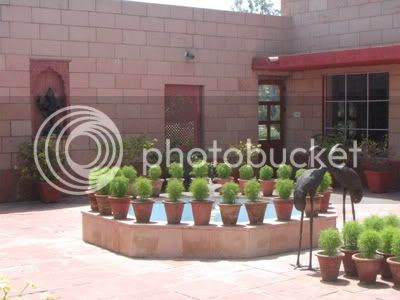 We went into the motel and the restaurant was just a few feet away. We were taken by surprise when we saw a man lying on the floor, right in front of the restaurant. The restaurant looked dark even though the window was opened. We were not sure if we should proceed, but the man woke up suddenly and said "Go in, go in, the restaurant is opened". We were hesistant initially but we didn't really care because... Two hungry gals need to eat!

The lights were immediately switched on as soon as we entered the restaurant. I guess they were trying to conserve energy. The restaurant was very spacious but it was still very dim, even with the lights on. We felt slightly uncomfortable as we were the only two customers and we didn't see any restaurant staff! After waiting for a while, a scruffy looking man came and handed the menu to us... 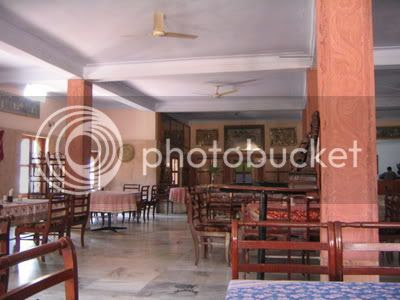 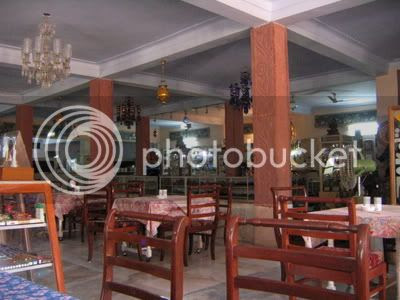 We ordered stuffed naan, mushroom in curry and garlic chicken. Well, we did not expect much from the restaurant initially, but we were in for a surprise. The stuffed naan was crispy thin, with mashed potatoes, diced onions and chopped chives within. The chicken was cooked in non-spicy sauce with lots of chopped garlic. The mushroom curry was cooked with diced onion, tomatoes and capsicum. It was really yummy and we almost licked the plates clean. 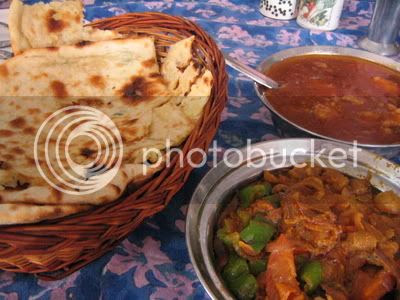 We had our dinner in a restaurant in Agra. That was the first time I tried the famous Marsala Tea in India. The tea had a harsh mouth-feel and we could see a layer of oil floating on it. 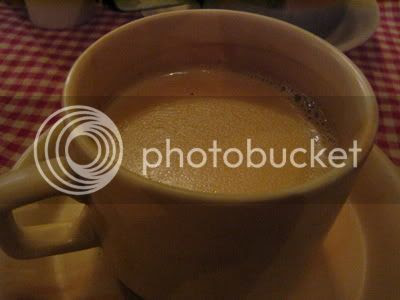 We summoned the waiter and asked him for the ingredients of marsala tea. This was what the waiter showed us: Cardamon, clove and black pepper. 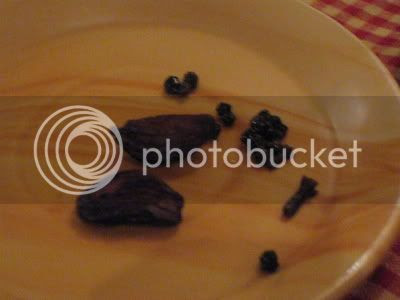 N ordered a spinach soup. It was bright green in colour, with two pieces of white and creamy lumps. She took a sip, frowned and took another sip. Then she asked me to try... I took a sip and almost spit it out. It was neither salty nor sweet, and it tasted like dish-washing water with something else. I actually took a photo of it when it was served, but I was so "traumitised" by the taste that I immediately deleted the photo from the camera. We laughed about the experience later and both of us agreed that not only we couldn't describe the taste in English, we couldn't think of a word to describe it in our mother tongues (She's Thai and I'm Chinese) too! Eew!

The rest of the dish were so-so. We didn't finished the mixed vegetable with dried fruits too (Top right). The waiter was kind enough to exclude the spinach soup from the bill after we told him that we did not like the taste. 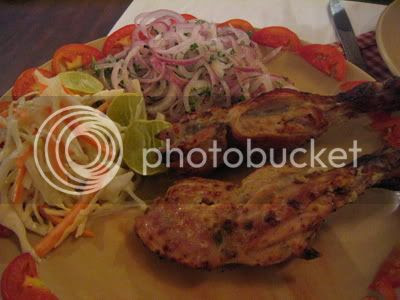 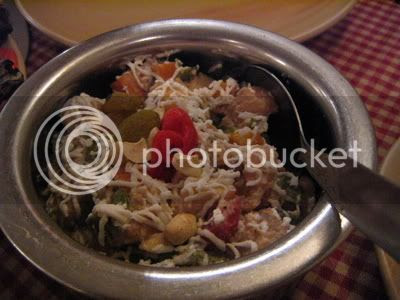 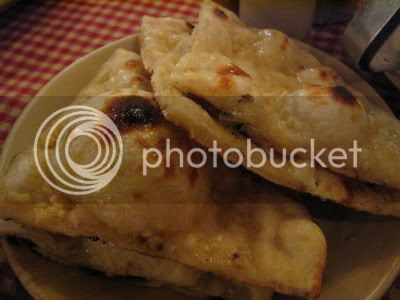 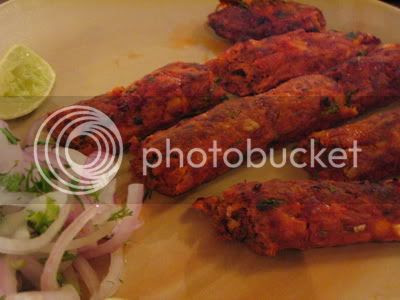 We visited the Taj Mahal at 6am the next day. I couldn't help but to show you a photo of Taj Mahal, isn't it gorgeous? 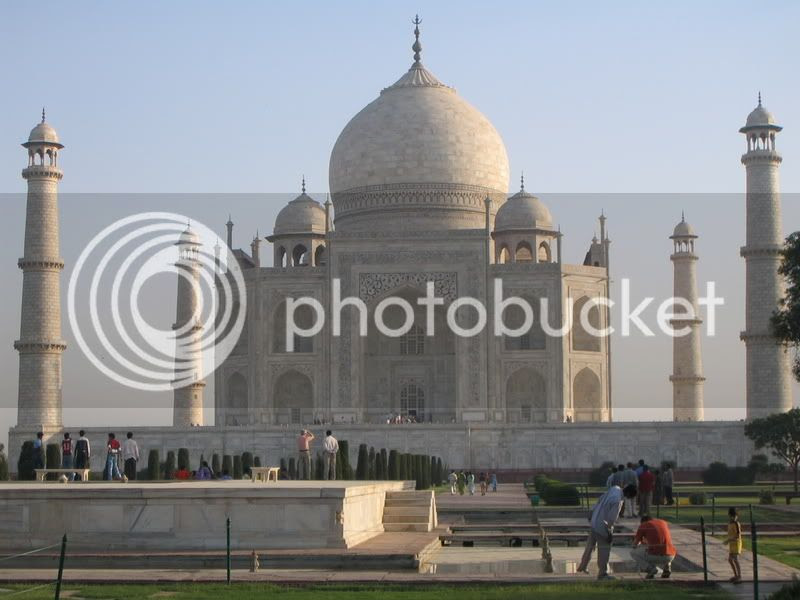 After we visited Taj Mahal, we went back to the hotel for a vegetarian buffet breakfast. It was a simple meal but I enjoyed it very much. Clockwise from top: Dosai, Paneer Pakora (deep fried cheese stick), Tomato Uptta Pam (tomato pancake) and Bhatura (crispy biscuit). 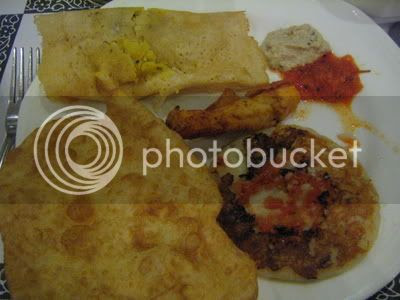 We visited another place in Agra after breakfast, then we headed back to New Delhi for a two-hour shopping spree before we took the night flight out of India. It was refreshing to have this Ginger Fizz after walking around the shopping area at 42 deg C. 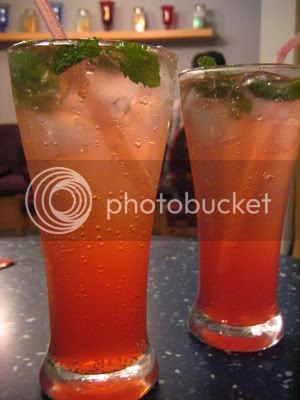 Anonymous said…
Wah Piggy, lucky you. I wished I could go for a trip to India and taste the food. I've been reading quite a few novels by Indian writers and the food mentioned always makes my mouth water. Shirley
June 07, 2005 3:18 pm

I'm a big fan of Indian food, and that was indeed a good opportunity to try out the real deal! We can have good Indian food in Singapore too, e.g., Shahi Maharani at Raffles City, have you been there? :-)
June 08, 2005 9:58 pm

Anonymous said…
Hello Piggy,
Sad to say, I haven't been there though my office is in Raffles City!!! A few colleagues' been there but they did not have anything good to say about that place. Mismatch of food and expectations? I went to the New Delhi restaurant on Race Course Road a coupld of times - it was fantastic. Oh, the mango kulfi was to die for! Slurp...Shirley
June 09, 2005 2:09 pm